You are using an out of date browser. It may not display this or other websites correctly.
You should upgrade or use an alternative browser.

I just received my MKE AP5 from Century. I bought the full kit with the brace (SKU HG6034B-N)
Let's go over the package as a whole, and why I think nobody should ever buy it (yeah it's gonna be that kind of thread) 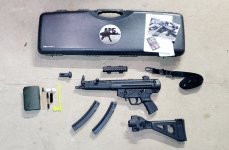 The flash hider. It's loose enough when mounted that it rattles, other than that it's fine. Easy to get on and off, but I'm not hopeful about how it will effect POI or accuracy.

The sling. Pretty standard, the metal hardware and the fabric seem tough and sturdy. The metal is very gritty from the parkerizing, however, and it's going to jack up the finish. I'll be keeping it because I'm a fan of the 3point sling, but buffing the metal parts.

The scope mount. Oh boy, this one is frustrating. Screws too short to even mount it, rail is almost tall enough to occlude the sights, mounting hardware is pure chinesium. I'm pretty sure century just bought these in bulk out of an airsoft catalog.

The cleaning kit. It's essentially useless. Same type you get from china for ""Authentic milsurp mosin/AK47/SKS/TACTICAL/G3/M14/FAL!"" party favors at gun shows. You know the table I'm talking about, the guy by the jerky vendor, with obviously fake SS daggers for $300.
It doesn't even have an actual chamber brush for the flutes, which irritates me more than it should.

The SB tactical side folding brace and adapter. Well, it's okay. It's a brace, we all knew going in those are a poor substitute. It locks securely enough, it fit fine on the pistol, it's more comfortable and significantly less expensive than the tail hook arrangements.
But the QD dling swivel retaining hole... doesn't. A firm tug on the sling will rip a magpul QD swivel right out, the ball detents don't lock into it fully.

The MKE steel 30 round magazines. I like them, they could hold 31 rounds if you forced it, which means there's some space under the follower to not overcompress the spring. (Chromed?) metal followers, they load easy and seem quite decent. Having one extra vs the core line just isn't worth the cost, however.

Whick brings me to the next topic, the cost.
I paid $1725 shipped for this kit. There's a $200 rebate, however, even at $1525 this is a waste of money when the AP5-Core is $1070 + shipping. Get a used or holiday sale brace, a stack of KCI 30's, and a soft case from Amazon and you're significantly ahead of this grab bag of "stuff"
I Strongly recommend Nobody buy the bundles, and instead get the pistol by itself.
A

Now we'll get into the pistol itself. This will mostly just be photos with the furniture off until I can get a range trip in (just got it today) 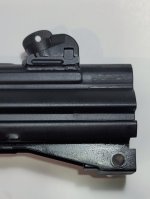 Weld on front of Magwell

Forward claw mount lugs. Left side of the gun (looking from stock)is milled much more aggressively and sloped, right side is very square on the bottom. (Photo is as if you were looking at the gun from the muzzle, sorry it's poor quality.) 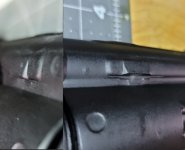 Finally, a view from the rear, with a fully loaded mag locked in. Why? Because it seemed like a fun picture to take lol. 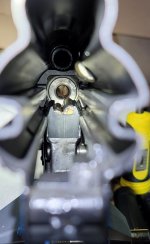 Thanks for the blow by blow and saving someone a few bucks!
A

Nra-Life-Member said:
Thanks for the blow by blow and saving someone a few bucks!
Click to expand...

If it can save just one user a dollar! That would be worth the time lol
I'll get some range performance as soon as time permits and post it here. I plan on shooting it for groups at 25 and 100yds off bags with a magnified optic and running a few hundred dubious quality LAX reman 115gr through it.
In the meantime, here's some fun photography. 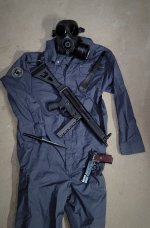 @AndyAK Thanks for the write-up. I too had one shipped in yesterday from Atlantic Firearms. I already own 3 MKE ATI imports (two 16" pistols and one K) so this AP5-P (K type) model was purchased in anticipation of running a suppressor. Honestly, I would not have purchased had it not been for this core bare bones offering. I have tons of mags, top rails and I hate the look of the flash hider on an MP5.

I'll probably start another thread and do a review myself

Looking forward to your range report and additional observations

Heading home from the range to edit and compile pictures.
Here's a preview of how the first range trip with the AP5 went.

Okay, there was some good and some bad today, I'm gonna go over it chronologically.

I had three kinds of ammo today for breaking in the pistol and accuracy testing. Primarily LAX (Formerly freedom munitions) "Remanufactured" 115gr Barry's target hollow points. This stuff is notoriously low quality ammo with a product page declaring "mixed primers and headstamps."
I also had a box if Blazer brass 115gr FMJ, and a box of 160gr semi-wadcutter cast and coated. (357mag cast bullets I swage to 0.356 and load to 820fps from a P30L) ammunition pictured below. 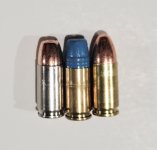 I started with offhand groups using the irons with 115gr LAX to confirm factory zero. The results were promising and the gun ran well. As expected with low power ammo in an MP5 it had almost no recoil. 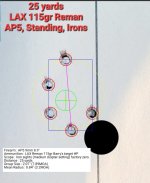 Satisfied with the zero and that it would feed my ammo (I was concerned about the hollow points) I started running it harder. Several bill drills, target transitions, just generally burning ammo. Went through three mags without issues, both slow fire and 0.18-0.23 splits on a timer. It even fed the goofy 160gr SWC rounds which totally surprised me.

At that point I started having problems. First I'd get a FTF in s mag.then it would happen a few times per mag. Then I started getting FTEs.AAnd eventually I was getting double feeds, and completely mangled cases chewed up between the trunnion and bolt (picture in previous post)

I decided to switch to accuracy testing and slow fire to finish out the day.
A

Accuracy testing started off rough at 25yds.
Not surprising given my goofy bag setup to clear the 30 round mags (I have a 20 in the mail.)
I didn't want to monopod off the magazine because at this point I was getting a serious malfunction every 15-20 rounds and was afraid of making it worse.

The LAX group was at least 4" and I didn't bother photographing it but the Blazer and 160gr are below. 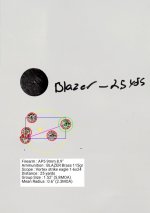 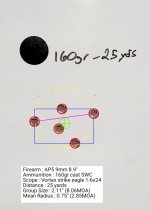 The results weren't what I was hoping for, but I wrote it off on poor ammo choice and pushed my target to 50 yards.
The LAX performance was, again, poor. I also didn't have enough 160gr to shoot complete groups.
The Blazer, however, pulled something incredible off. I have no idea how that cheap light ammo pulled this off from a 9" subgun. 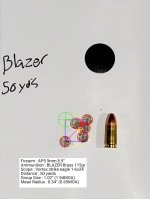 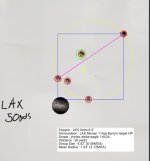 At this point I decided to test another concern. The QD flash hider that came in the bundle does not lock up tight enough to prevent movement and rattles when you shake the gun. I don't know if the genuine H&K examples do this, but mine absolutely does and I was concerned it would make my groups even worse. I decided to waste the cheap LAX on a test since I was running out of Blazer, and hoo boy was I shocked. Apparently just because it shakes rattles and rolls doesn't mean it's a bad thing. 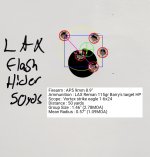 Finally I moved to 100 yards.
At this point, I was experiencing a failure-to-something nearly every shot.
Blazer again knocked it out of the park for a low tier ammunition. LAX tried to keep up. 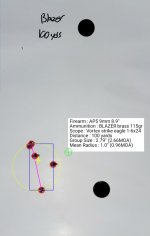 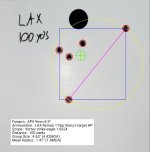 I don't know what's considered "good" for an MP5 in the accuracy/precision department, but I am EXTREMELY satisfied with mine.
A

This was the end of the range trip, malfunctions had become a cardio workout they happened so frequently, and I was out of good ammunition. I was also havingto completely break position and remove the magazine to clear each malfunction. The 100yd groups were shot having to lift the gun off bagsfor remedialaction every other round! I can't believe I hit the berm let alone the target

After arriving home I set about to diagnose the issues. A friend suggested I check the extractor spring, thinking maybe one of the early FTF's had caused damage that got worse each time and snowballed. Looking at the BCG and inside the receiver I couldn't see any obvious damage. There is some slight "polishing" on the bolt from rubbing against something.
The extractor spring also appears to deviate from HK components, as evident by the color of material. 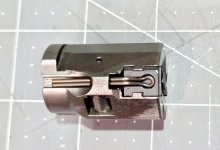 In all, I'm leaning towards a case of new gun, really low power and quality ammo (dirty and low pressure) and not being appropriately cleanedbefore taking it out. (A spritz of CLP, a good cleaning does not make)

I'm going to load some +P 124gr with "extreme bullets" FMJs and rifle primers for my next range trip, and scrub the dickens out of the internal components.
I'll definitely report back after!!
For now, I'm absolutely shocked by the accuracy of this little turkish SMG clone, I'll be pushing it on steel to 200yds+ next time I drive out to my long range club.

Thanks for the report. The accuracy was impressive. Interested in seeing (hearing) a 200 yard bing!
A

Nra-Life-Member said:
Thanks for the report. The accuracy was impressive. Interested in seeing (hearing) a 200 yard bing!
Click to expand... 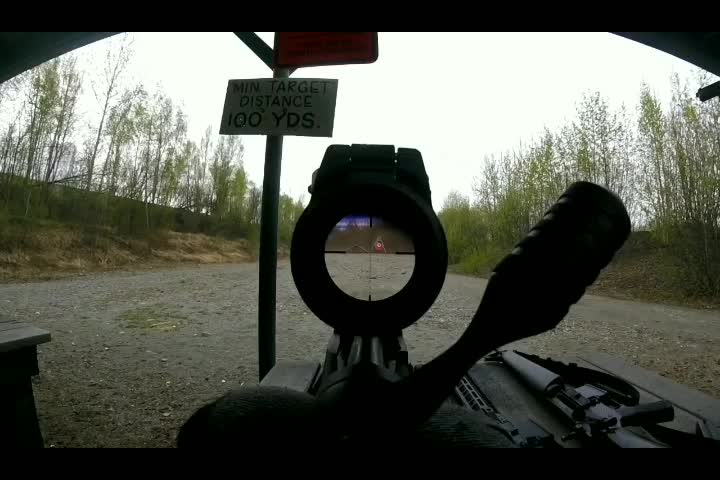 Watch this video on Streamable.

Thank you very much for the incredible and exhaustive review, tutorial, and range report.

Maybe MKE should have let you be the tester of their firearms imports.

Family firearms had them, they drop the price to $1070 every time they come back in stock.

Thank you very much for the incredible and exhaustive review, tutorial, and range report.

Maybe MKE should have let you be the tester of their firearms imports.

I have the qualifications! Lol 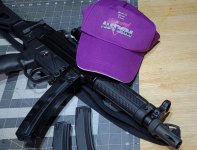 Looked at their website - prices overall seem good. Thanks!
A

Took it back out today and it ran much better. I think my ussues were purely ammo and break-in period. 115gr Barry's loaded over 4.9gr of titegroup was a reliable combo. 124gr SAR 9mm was also really good. That stuff has some punch, I think it's hotter than the white box stuff Winchester sells as "nato"
I had a failure to eject (not to extract though) every three mags or so right at the end of the mag with my 115gr, none with 124. Fired just under 300 rounds.
I also tried out the 3lug flash hider at night. 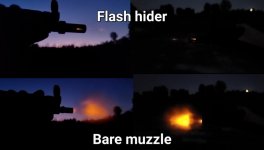 Thanks for the updates. Maybe I'll get mine out this weekend.

AndyAK said:
Took it back out today and it ran much better. I think my ussues were purely ammo and break-in period. 115gr Barry's loaded over 4.9gr of titegroup was a reliable combo. 124gr SAR 9mm was also really good. That stuff has some punch, I think it's hotter than the white box stuff Winchester sells as "nato"
I had a failure to eject (not to extract though) every three mags or so right at the end of the mag with my 115gr, none with 124. Fired just under 300 rounds.
I also tried out the 3lug flash hider at night.
Click to expand...

Thank you for the update--- nice dusk picture.