Favorite modern service rifles (some, but not exclusively, HK content).

I should also note that this list includes rifles that are essentially prototypes or have sold in limited numbers, and is also an excuse for me to post some of them in action (when possible).

I also have to admit that I'm not a big AR or AK guy, and this list will focus on rifles designed or manufactured post 2000 or so.

First is the main HK entry on this list, the 433. With the German Army apparently set to adopt the HK416 A8, the 433's future seems somewhat uncertain (though it seems that HK are still working on it). This is the only decent video I found of the recent version of it:


And then the rifle that kind of started the whole modern modular rifle craze, the FN SCAR. Though originally designed for US Army SOCOM, it's now the general issue service rifle of the Belgian and Portuguese Armies.


And then the CZ Bren series. Firstly, the 805 is where it all began, basically as a hybrid of the FN SCAR and the HK G36. It was even intended to use a polymer upper, though this got changed to aluminum during the design process. It was replaced by the CZ Bren 2, which is a lightened and simplified version with other detail improvements.

Any thoughts? Anyone one want to make their own contributions? Discussion open

I also forgot to include the IWI Carmel, which is IWI's polymer receiver rifle that's their take on a SCAR/G36 hybrid:

Bonus video on the FN SCAR 20/HPR has adopted by the French Army.

Couldn’t understand a word of it.... but the last part was spoken in the universal language... that I got!
Thanks for sharing!!!
M. 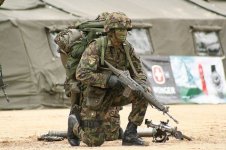 Gotta appreciate some Sig 550 action, too. Take a gander at the Sig/Swiss Arms website and you'll find a bewildering number of options to configure a Sig 550/551/553.
M